Our themed learning over the next two weeks is History of 20th Century Leisure and Entertainment in Britain and Design Technology - design and make a toy which links to our English.
The Design tasks are under the history tasks.

Design Technology: design and make a toy. This links to our English assignments.

Work through the Power Point and answer these questions.

If these links do not work you can search You Tube directly.

Charlie Chaplin and the Lion.

Now think about the questions on the last slide. I have typed them here for you. Try researching the questions if you are not sure.

Your second History task is to learn about the start of radio.

Put these significant dates in chronological order starting with the earliest. Read carefully – there are 9 dates and events to find. Then draw a timeline of these events and developments.

The first digital radio transmission was in 1995.

The British Broadcasting Company started in 1922 (and became the BBC in 1927).

Radio Caroline was a pirate radio station which played pop music. The music was broadcast from a boat and it started in 1964.

The first portable digital radios went on sale in 2001.

Describe the use of radio during the Second World War. Find out what channels there were and what types of programme were broadcast. Try to find out about people who presented programmes and the importance of radio – don’t forget there was no television.

At school we had been planning a whole school celebration of V. E. Day. Here are 2 web sites which may help you plan a stay at home V.E. celebration. Send us your photos!

Watch this You Tube clip.

WARNING: some of the technical explanations are for Physics graduates only.

We do not expect you to know these technical terms!

Just enjoy the montage of images showing the development of TV sets and TV broadcasting over the last 90 years.

If the link doesn’t work - go to You Tube, search “History of TV” and choose Evolution of Television 1920 to 2020 posted by Captain Gizmo.

Research one aspect of television since the 1940’s. You may want to learn about the history of football on TV, or other sports. Or perhaps you want to research music on TV or chat shows or anything else you are interested in. Below are some useful links but there are many more websites covering different aspects. Do NOT copy and paste chunks of text unless you name your source (teachers can always tell.) You may want to paste a couple of photos to illustrate your work.

Prepare a fact file.  I have made a fact file about the history of TV weather forecasting as an example of what we are looking for.

Do you know who Britain’s first weather forecaster was? Back in the 19th century, Admiral Robert Fitzroy was very concerned about how many Royal Navy ships were being lost in storms. He charted the weather for years and became able to predict when storms at sea might happen. At first, Fitzroy was laughed at but he persisted and the Meteorological Office was created.

With the arrival of the telegraph (about 1860) Fitzroy could communicate quickly with the Royal Navy fleet and in 1861 the Times Newspaper published the first weather forecast for the public.

BBC radio was quick to broadcast daily weather forecasts from 1923; the shipping forecast started in 1925 and continues twice daily on Radio 4.

Early TV in 1936 experimented with a weather forecast and this became a daily feature when the BBC TV came back after the war.

1967: use of magnetic symbols (which often fell off the map)

"Earlier on today," he said, "a woman rang the BBC and said she'd heard there was a hurricane on the way... don't worry, there isn't!" A few hours later the worst storm in 300 years hit southern England, uprooting thousands of trees and killing 19 people.

“Nowcasting” is predicting weather for the next 6 hours and is widely available on computers and phones.

Design and Make a toy.

In English you designed an “add on” for a book to inspire young readers and you will be pitching your idea to teachers.

In Design Technology you will design a toy for a young child, make the toy and advertise your toy to parents.

Your starting point will be what you have available at home. Here are some things you can consider.

Now make a detailed drawing of your toy and label it. Send us a photo if you can (or draw it on the computer.)

Assemble all the things you need. Enjoy making your toy. This is what I did with paper towel, string, plastic bags and a small box with brown paper.

Monkey is a volunteer paramedic.

Everybody can adapt a toy to achieve this assignment.

Watch a couple of adverts on TV.

Make a video if you want in the style of the ads you have seen.

Make a poster and send us a photo.

You can draw it on the computer or by hand.

Name of the toy

Why it is amazing and young children will love it.

How safe/educational/fun it is (for parents)

How much it costs and where it is sold.

Exaggerate and be creative. Remember most parents buy toys because their children pestered them into it!

See how Mrs Herbert got on.

Monkey volunteers as a paramedic.

During lockdown we are doing our bit for the community by creating new fashion accessories for your toys.

Normally this Personal Protection Equipment set for a medium sized toy would sell for £75 but you can get a set delivered to your door for the shockingly low price of £49.99! (+post and packing) 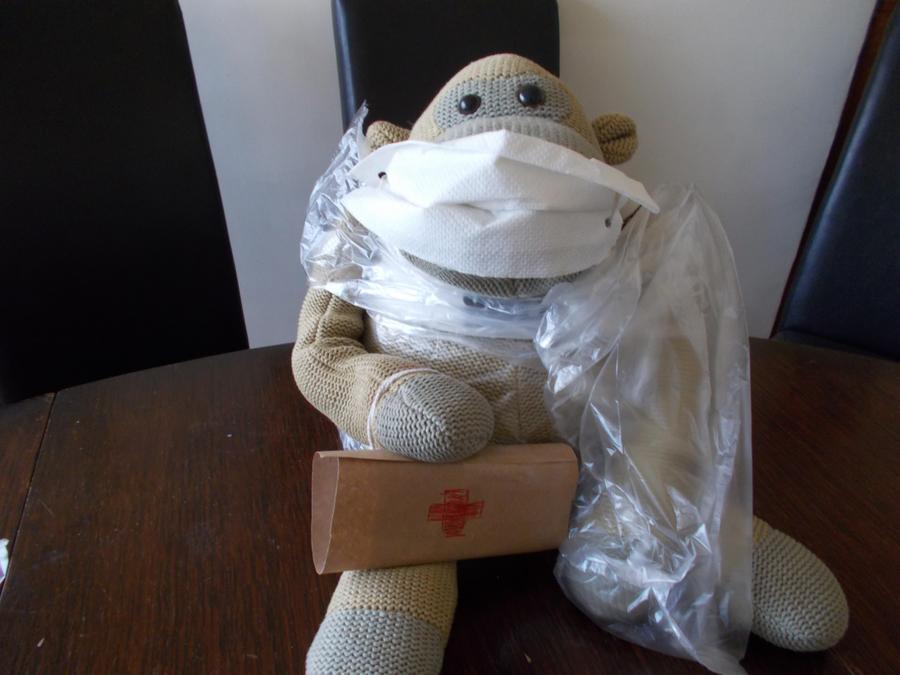 Hurry this offer must end next Wednesday.

Visit us at whataripoff.com/paramedic to place your order now.